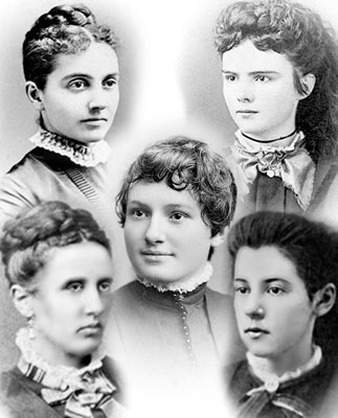 Colby College in Waterville, Maine, was the first college in New England to
admit women on an equal basis with men students. The first  woman student was admitted in 1871, and for two years Mary Caffrey Low was the only woman student at Colby College. In 1873, four more young  women from Maine, Elizabeth Gorham Hoag, Ida Fuller, Frances Mann, and Louise Helen Coburn were admitted to Colby and the five young women  found themselves frequently together. During the school year of 1873-74, the five young women decided to form a literary and social society.  They were told by the college administration that they needed to present a constitution and bylaws with a petition requesting permission to form Sigma Kappa Sorority. Their purpose at the outset was that the sorority should become what it is now, a national organization of college  women. On November 9, 1874, the five young women received a letter from the faculty approving their petition. Thus, this date has since been  considered our Founders' Day.

In our first constitution, chapter membership was limited to 25. The original
group was known as Alpha chapter and as our sorority grew,  Beta chapter and
Gamma chapter were also established at Colby College.

In 1904, Delta chapter was installed at Boston University. Elydia Foss of Alpha chapter had transferred to Boston and met a group of women  who refused to join any of the other groups on campus. When asked if Sigma Kappa was a national organization, Elydia replied, "No, but it is  founded on a national basis." Elydia then took the necessary steps to make Sigma Kappa a national sorority and it was incorporated in the  state of Maine on April 19, 1904. The new status as a national sorority made Sigma Kappa eligible to join what was then called the Interfraternity Conference, now known as the National Panhellenic Conference.

Symbols and Insignia
The symbols and insignia of Sigma Kappa have great meaning which is revealed during the ceremony of Initiation. They demonstrate our heritage and values and are significant because of what Sigma Kappas believe. Members of Sigma Kappa are obligated to uphold our high standards and ideals, remembering that Sigma Kappas all over the country are bound by the same tenets.

Flower:  Violets were loved by Sigma Kappas from the very beginning.  The delicate flowers grew wild along the banks of the Messalonskee River where the founders sat and dreamed of Sigma Kappa. In June 1892, the violet was adopted as our official flower.  In 2008, the 83rd national convention clarified that the official flower was the wild purple violet, as distinguished from the African or other types of violet, which the founders had enjoyed during their walks in Maine.

Symbols:  The dove was accepted as an official symbol of Sigma Kappa at the 1984 convention and its significance is revealed in the ceremony of Initiation. The heart was adopted at the 1988 convention because of the close connection to our open motto.

Coat-of-Arms:  The Sigma Kappa coat-of-arms reflects the familiar symbols of the sorority - the dove, the violet, the Greek letters, and maroon and lavender. Adopted in 1911, the coat-of-arms consists of a maroon shield with a diagonal bar of gold, bearing five lavender stars; the lower portion a coiled serpent. Above is a wreath of alternate maroon and gold, surmounted by a dove in silver, with outspread wings, all beneath an arch of gold rays. Below is a scroll of silver, bearing in black the open motto and the date 1874. The significance of the coat-of-arms is revealed only during the ceremony of Initiation.

Legacies are important to Sigma Kappa.  Help your introduce your legacy to Sigma Kappa & help her love Sigma Kappa from an early age.  If you have a legacy (granddaughter, daughter, sister, or niece), click HERE to register her to receive free gifts from Sigma Kappa.